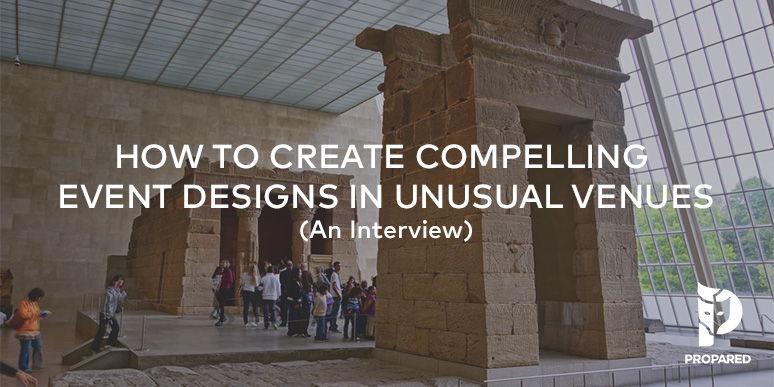 How to Create Compelling Event Designs in Unusual Venues {Interview}

Events can quite literally happen anywhere. Indoors, outdoors, you name it. Want to throw a party at a tire repair shop turned nightclub? Done. On the deck of a retired US aircraft carrier? Easy. When you think about it, even venues that host some of the industry’s biggest shows, such as New York Fashion Week and the Met Gala aren’t traditional spaces for producing events.

That’s where the fun comes in! A theatre or event management education can give you the foundation and basics. But the reality of event work? It’s almost always a little messier. Think of it like training to be an astronaut in a flight simulator. There are just some things you can’t replicate in a controlled environment. You’re going to need to get creative.

I recently sat down with the super talented lighting designer, Derek Van Heel. With over 15 years of live production experience, he knows a thing or two about designing seamless, engaging experiences in a lot of weird, unconventional “found spaces.” Here are some excerpts from that conversation.

Ryan: What do you consider to be an unconventional space?

Derek: It’s funny, I really don’t think in those terms anymore. 10 years ago, I had a pretty rigid idea of what a theatre was. If it didn’t have a proscenium, I considered it non-traditional. Of course, up to that point, I’d only really designed in buildings that were originally designed as theatres.

Then I started working professionally and everything changed. The downtown theatre scene in New York is comprised of all sorts of buildings that have been converted into theatres over the years and decades, each with unique challenges to overcome.

R: Do any notable shows come to mind?

D: The biggest non-traditional show I’ve done in the last few years was a piece I co-designed with the Civilians at the Met. It was the part of the museum that houses the Temple of Dendur (pictured above). It’s this huge room with a glass wall and ceilings more than 100’ high. Needless to say, the space was designed to house ancient Egyptian artifacts, not to host events.

Plus, the piece itself wasn’t traditional either. It was designed to have the audience roving around the room while monologues were presented in various spots.

R: What were some of the biggest considerations you had to take into account?

D: There was a whole list of questions we put together that you don’t normally have to ask in a theatre or event space.

Any single answer could drastically change the entire design.

R: Is there any gear you tend to rely on in these situations?

D: LED technology has revolutionized lighting in found spaces. It used to be that to provide any significant lighting for an event you had to go find a major power tie-in in the building to pull enough amps.

The standard S4 Leko pulls 5 amps. This means you can only plug 3 of them into an outlet. That’s pretty limiting and not too long ago, was one of the only options. Nowadays the S4 LED Series 2 pulls 1.4 amps. That’s an incredible increase in the tools and flexibility now at our disposal.

In just a few years we’ve gone from requiring a major power source to having an incredible array of tools in low-power varieties. Now you can go into most any space and create an incredible design with only a couple of wall outlets. LEDs also continue to get better and brighter every year.

Wireless DMX has also been hugely beneficial because it reduces the number of wires and infrastructure that needs to be run. This can be great when load in times are tight.

R: What about non-lighting considerations?

D: One of the biggest challenges to almost any non-traditional space is that there are rarely any rigging points. This is one of the most common things I confront. Rigging is dangerous, and it takes just the right situation to be able to rig equipment. We tend to take it for granted because theatres provide for it so often. When there’s no rigging, everything for the event (lighting, sound, video, scenery, etc.) has to be floor supported.

This can severely restrict my options particularly when combined with low ceilings.

R: How do you overcome this challenge?

D: It becomes about embracing the space. In a proscenium theatre, you get to hide all your stuff and create a new world for the audience. In non-traditional spaces there’s rarely that opportunity. It’s important to not fight that.

The lights will be on the floor which means you’re going to be casting shadows on the walls. My colleague, Dante Olivia Smith likes to say, “If you can’t hide it, feature it.”

R: Talk a bit about logistics.

D: I think one of the biggest things to remember with non-traditional spaces is that you can’t make the same assumptions that you can with a space designed to house events. This is true both for yourself and for the people you’re working with. This really boils down to expectation-setting.

For example, the people running the venue may not be as accustomed to doing events. Things that we do on a regular basis might be shocking to them, like bringing a bunch of bulky theatrical lighting equipment into a restaurant.

It’s a good idea to make sure you let everyone involved know EXACTLY what you will be doing and what the end result will look like in the end.

R: Especially when the venue you’re working in has its own needs.

D: It’s important to understand what’s happening around you. Take the restaurant example again. Your main power source is often in the kitchen. Running a bunch of power cables through it seems like a good idea when the space is empty. But later that night, there will be a dozen cooks and 20 waiters all working in it at full speed. They might not appreciate all the added stuff in their room.

R: Plus, if you’re using a space that normally conducts a different kind of business, you’re fighting to get access.

D: Right, non-traditional spaces may also carry non-traditional working hours. I’ve found myself working a fair share of overnights in office buildings and lobbies getting their holiday parties set up for the following day. You also may have drastically reduced timetables for loading in a show.

R: I know what you mean. We (Tinc Productions) were doing the MLB All-Star Party back in 2008. They had rented out the entire Museum of Natural History. For those that don’t know, the AMNH takes up an entire Manhattan city block. We’d been hired to light every room of the museum inside and out. During our first walkthrough we asked when we could start loading in. They said they could start shutting rooms down at 2pm on the day of the party!

D: Exactly. Museums and public spaces want to stay open as long as possible because it benefits them financially. You, on the other hand, want as much time as possible to put in your show. This can lead to tough negotiations for getting time in the space prior to the event itself.

R: What about equipment and sourcing?

D: Found spaces will often have no house gear. That means everything will need to be trucked in which means you’re going to have a bunch of empty cases to deal with. In large cities like NYC this can become challenging. We often have to send a truck just to pick up and store our empties during the event.

Also, with no rigging points, you may find things taking far longer because you don’t have the convenience of line-sets, grids, and catwalks. You’re probably going to be building your lighting positions before you can even begin hanging the lights.

R: What would you say is the most important thing a designer can do while finalizing a plot?

D: I like to think about things from the Production Manager’s perspective. It’s helpful to know the budget and timetable and what gear I have to work with from the start. And I like to manage expectations. When an idea comes up, be sure to highlight and explain as in depth as possible what the effect is going to be as well as any ramifications.

R: But just because something can be done doesn’t mean it’s the most efficient use of time.

D: True. For example, you want to put a truss tower somewhere. That means you need to somehow get power and data and make sure it will be safe. Yes, it’s the job of the rigger to actually secure it but I think it’s the designer’s job to do some thinking on its feasibility. You don’t want to be creating something that’s going to take 7 hours to set up.

R: It’s really about balancing production realities with the desires of a client.

D: Between a rock and a hard-place there. You don’t want to be handing in a plot that’s impossible to put up in terms of time and resources. But you can just say no without an explanation to a client. Again, manage expectations. “I’m sorry we can’t light that bar from that angle. It unfortunately requires having a light 30’ in the air over a pond.”

Submitting a design plot that strikes the best balance is tough. I still always feel like maybe I could have done this thing differently to be better in both directions.

Derek Van Heel is a Brooklyn based Lighting Designer specializing in Theatre, Dance and Opera. In New York, his work has appeared at The Alvin Ailey Citibank Theatre, Jazz at Lincoln Center, The Metropolitan Museum, Off-Broadway, and the kinds of basements, bars, churches, and teeny-tiny rooms where New York theatre is often forged. Check out his work at http://derekvanheel.com.