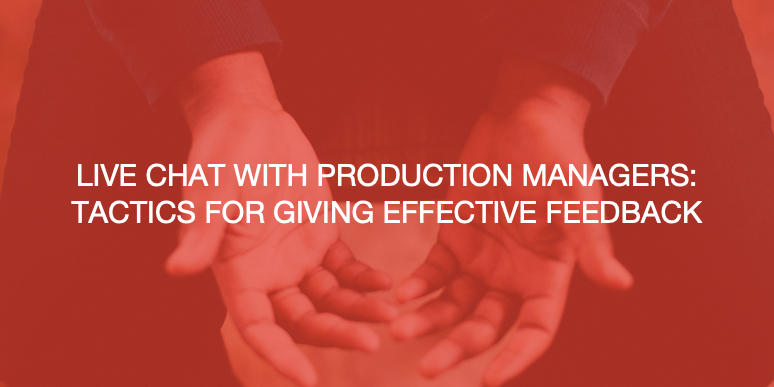 Last week we had a lively chat about the challenges of giving feedback. Below you’ll find our discussion (lightly edited) along with a few best practices.

What causes conflict when giving feedback?

What makes feedback so hard to hear? How do you overcome it?

Jackie: Often problems in giving or receiving feedback arise because a person wants one sort of feedback and gets another. They may hear evaluation from a comment meant as coaching or appreciation. Can any of you give a good example for this?

Bender: I say “I appreciate you” a lot, and I hope people don’t think I’m just being cute. I genuinely mean it when I say it.

Mel: I think I’ve see conflicts arise in “feedback sessions” because most of the time the feedback is always assumed to be negative.

Ryan: Agreed, many times I see the tendency to only “sit down for a conversation” when there’s something that needs improving. I wonder how we can head this off?

Mel: It needs to happen before you even get to the actual feedback. There is stress that occurs that can make someone not totally open to the positive or the constructive. I guess that is really making sure that your Opening is genuine.

Bender: And when something negative is preceded by a positive, it makes the positive seems less than genuine.

Jackie: Absolutely. I think a lot of that comes from identity triggers.

Jackie: It’s that overwhelming feeling that someone gets when they hear feedback that they perceive as cutting into who they are as a person. Feedback can make someone feel overwhelmed and off balance. It takes work to see the problem at scale and have a growth mindset – to see that the way they do things now are changeable and not a judgement of themselves as a person. A good example might be someone receiving feedback about not taking enough initiative and hearing “I’m lazy and useless”.

Ryan: That’s where keeping things factual can come into play. Critique the situation and not the person.

Bender: So how do you reword that? Something actionable?

Bender: Like, instead of “take more initiative.” say, “aim for advancing 3 shows this week instead of just 1. “…so you’ll be farther ahead and not feel overwhelmed.”

Jackie: Ryan put it perfectly, keeping things situational and factual. And not making generalizations, even if there are multiple instances.

Ryan: Followed up with the actionable: “How can I help you get there? What are some things we can do? Try it out and then come back together to see if it’s helping.”

Jackie: Yes! Follow ups are also important, and giving appreciation when you see someone course correct.

Ryan: And ensure they understand why you’re asking them to adjust. Sometimes the goal isn’t always clear. People in other positions don’t always have access to the big picture and what you’re trying to accomplish with the feedback you’re giving.

How to Alleviate the Fear of Feedback: Make it Routine

We discussed the importance of how an organization can structure their formal feedback processes.

Jackie: It sounds like one challenge is that people hear feedback and immediately think,”I did something bad.” What are some ways to alleviate that?

Ryan: My first thought is to create a system of REGULAR feedback within the company.

Herman: I do my best to avoid those “Feedback sessions” because of the stigma they come with. There’s a time and place for them and it’s not really the best place to convey something positive in my opinion. If I have something positive to say I instead try to do it very openly, almost in public setting so the recognition can be witnessed by more than just the 2 parties involved.

Jackie: That’s a great point. Public appreciation can be powerful.

Ryan: Herman I hear you there. How do you typically handle the harder conversations then?

Herman: Public appreciation / Private humiliation (…that’s too strong of a word, but it rhymes!)

Jackie: YES. Negative feedback given in public is humiliating.

Bender: At my university, there are yearly evaluations. I often find people are surprised when they discover they ranked lower than expected in certain areas because there had been no warning. No “hard” conversations throughout the year at all.

Herman: The harder conversations should be done in private. If you establish the routine of doing positive things openly and negative things privately, then I think the recipient becomes a little more receptive.

Ryan: Does it set up the expectation though that if “Herman wants to talk” then I’m in trouble?

Herman: I tend just to take them aside and have the talk. Always making sure to be open and honest about whatever good or bad things I need to say. Yes they see it coming, but I think it’s taken more seriously.

Ryan: In the past, I’ve found success with the concept of regularly scheduled check-ins (monthly?). That way people aren’t thinking that every time we sit down to chat that something is wrong. It provides a time for all kinds of conversations, feedback (in both directions), and updates. Plus, we don’t let things slide or build up that way.

Of course, this doesn’t account for times when immediate conversations are necessary (though it does seem to reduce their likelihood).

We’ve established feedback given at regular intervals can help alleviate the stigma of all feedback being “bad”. This helps prevent some of the identity triggers from making the feedback hard to hear for the receiver. But when is immediate feedback the best way to go?

Ryan: Question for you all, what are the most common situations you have all experienced where immediate critical feedback is required? Do you notice any kind of trend?

Herman: A public argument inside the theater during the tech process.

Jackie: What comes to mind most from my experience is ASM behavior in a rehearsal room or backstage. If someone comes to me and says they’re being made to feel uncomfortable, I have to address it before it gets worse.

Mel: That seems like conflict resolution as well. I would say someone that doesn’t follow all of the prescribed safety protocols. They haven’t hurt anyone or themselves, but need to adjust their behavior.

Herman: When it’s gotten that big, it certainly calls for some kind of immediate resolution.

Mel jumps in with a hard question on how to give coaching feedback and counter intuitive negative reactions, and we circle back to the importance of regular check ins.

Mel: Giving negative feedback with the express purpose of motivating someone to do better is the hardest part for me personally.  I want someone to know that I think they can do better, but want them to get over the emotional turmoil of that feedback quickly and move on to the actionable “how do I do that” portion.  I almost don’t care about what happened. I want to jump to the part where we get excited to figure out how to fix it. I worry that this comes off sometimes as, ‘I don’t think this feedback is really all that serious.’

Herman: To a certain extent that expectation is set up, but I would counter by asking, “Is that a bad thing?” If they are in trouble then I don’t necessarily mind that person being in that head space when they are called over.

Bender: I think the actionable part makes a difference. It’s not just “do better”, it’s let’s figure out what doing better looks like and how to achieve it.

Ryan: Bender, yes, that’s another huge part of what I’ve found successful before. Keeping things as factual as possible.

Jackie: Working your intentions into the opening for the conversation could be really helpful. If they hear that first, someone’s internal monologue won’t drown it out dissecting the feedback.

Mel: Herman I agree with you. Young managers that I’ve mentored have an issue with this because I believe they are worried about “being liked” by the people they are managing. And therefore get in their own way and equate giving negative feedback as being a potential area for them not to be liked.

Herman: Motivational feedback I wouldn’t view as “negative”. The one giving it certainly doesn’t intend it to be taken that way. So this would be a type a feedback that I would do a little more openly. But maybe phrased in the form of questions, to appear as if we are both working on motivating the individual. What do you think about trying this option instead? Do you think it would work? Or how about this? What are the others doing?, etc. etc.

Mel: Herman I like that a lot.  Besides we don’t always have all of the answers and there may actually be other issues that are at play that we aren’t aware of.

It gives the receiver room to give their side of things as well as have a discussion rather than a talking to. Regularly scheduled feedback could work for small teams, but large teams is simply a no go.  It would be a full time job.

Encouraging Feedback from Everyone

Having a good mindset empowers your team. We talk about how to set up a policy of openness.

Ryan: I see many of my “immediate feedback” conversations happen when I haven’t done my job well enough as a manager to set expectations/give clear instructions. It’s often a time for a course correction for both me and the person I’m working with. That’s why I love regular check-ins. It tends to nip so many little things in the bud.

Jackie: These conversations are a great opportunity to hear the other side of the story

Bender: Employees need to feel empowered to be the ones initiating the feedback session, too.

Ryan: YES! How do we encourage more of that?

Bender: Not “I’m gonna go yell at my boss”, but “I have an issue and I know my boss is cool for me to bring it up.”

Jackie: Modeling is a great way! “Nothing affects the learning culture of an organization more than the skill with which its executive team receives feedback.”

Herman: At the Center just before I started, we used to do “reverse evaluations”. I’ve always thought it was a great idea. It’s when the people that report to you, evaluate how well you have done.

Bender: I have a pic of Lucy and her psychiatry stand on my door. everyone knows they are welcome to come in to BS, get information, ask for advice, or complain.

Ryan: How have you created a situation where everyone knows they’re welcome to do this? Particularly new folks?

Bender: I like to think I’m pretty friendly and gregarious in general. I’ll just straight-up tell them. “Hey, if you need anything, this is where my office is, email me, whatever.”

Jackie: Trust and humor can be pretty important.

Herman: Yes. Our job is to entertain people. Let’s keep ourselves entertained while we do it. I also like to simply share my problems as well. Things that only I have to deal with. The hope is that if they see my perspective, they’ll then understand where I’m coming from when I have to make those harder decisions/give the harder feedback.

Bender: When someone has complaints, especially student workers, I ask them what would work better for them. It’s been a long time since I was in school. I don’t pretend to understand their lives. I need them to tell me.

Jackie: Bender, as a recent student and teacher, I really appreciate that.

Bender: Standard protocols are obviously important, but so is flexibility. This is how it should be done, unless someone comes up with a better idea!My favorite (paraphrased) saying is “the most dangerous words in the English language are ‘but this is how we’ve always done it.”

Our top tactics and tricks for giving effective feedback.

Do you have any feedback for us? 🙂 Ideas that weren’t talked about, questions, corrections, or just want to chime in? Leave a reply below!