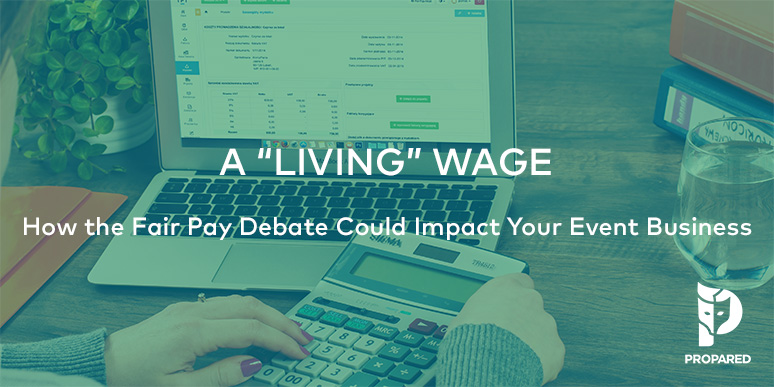 “Living” Wage: How the Fair Pay Debate Could Impact Your Event Business

What constitutes a fair and just minimum wage? Or perhaps the better question is: what should the minimum wage be, such that it is high enough for an individual to maintain a “normal standard of living?”

The debate over this “living wage,” especially in the broader context of existing minimum wage law is long and contentious. Spoiler alert: we don’t intend to solve it here. But recent legislation has passed or is pending in several major cities and at some state levels as well. At the same time, many more bills are currently working their way through state and local legislatures.

No matter the outcome, they will have a significant impact on many businesses. Especially event companies that often hire freelancers or contract low to minimum wage workers. Let’s take a quick tour through a few of the issues businesses, and specifically event companies are going to face as the “living” wage debate heats up.

Let’s leave aside applicable union rates for the moment. That’s another blog entirely. How would an increase in the minimum wage in your city affect you? While current wage data for Meeting and Event Planners shows average earnings of $19-23/hour, there are plenty of ancillary workers earning far less. This is true for both freelancers (project to project workers, technicians, etc.) and staff. Even if you aren’t hiring any minimum wage employees, your labor costs could still rise. As the living wage baseline increases, there is pressure to raise all labor rates in accordance.

If your labor is more expensive, your suppliers’ will be, too. The wait staff at a restaurant you book for a wedding reception. The booth workers at an outdoor fair. If your vendors are paying their employees more, they’ll pass these costs on to you. Even if you’re able to trim operational overhead, you’ll likely raise your client fees in turn. All things being equal, maybe it won’t matter. Maybe these changes are a wash. But there’s always the chance your fees end up crossing a threshold past which certain clients are no longer willing to pay.

3. Purchasing Power and Quality of Life

Over the past 15+ years, minimum wage increases have not kept pace with the rising cost of living. This means that dollars earned for lower income workers have less power in the market than they did 45 years ago. Even though labor productivity has continued to grow, corresponding increases in wages have not. As low wage earners work longer hours to offset the decline in the value of their money, quality of life decreases.

That’s a big deal. Quality of Life, or Better Life is a data-driven, measurable index that can provide powerful insight into how workers feel about their housing, income, educational opportunities, and overall life satisfaction.

Imagine how your event workers view their quality of life, based on what they earn. Do they feel stable in their current financial situation? Do they stress over paying bills, putting children through school, or upcoming medical expenses? How will such feelings, positive or negative, impact:

You should be considering these issues because your employees certainly are.

Every company at some point needs to address the following question: is it more expensive to hire and train a new employee or raise pay to retain a current one? Let’s look at the financial implications.

One argument against raising the minimum wage states that it would overly squeeze business profits. Rather than increase prices, companies would simply cut the sizes of their labor forces. Imagine having to produce the same event but with 25% less staff. Could you do it? Would a raise in wages boost worker productivity to offset the loss of extra team members?

This is a perfectly valid concern but companies must also weigh the cost of turnover. The Center for American Progress found that to replace and train an employee earning less than $30,000/year, companies spent 16% of that annual salary. For employees earning $50,000/year, costs jumped to 20%. Before deciding what wages are just and fair and at a level that can allow for a “normal standard of living,” your company needs to think about these implications.

The minimum wage and broader “living wage” debate is just beginning. According to MPI, the meeting and live event industry employs 1.8 million people in the US. Though many workers already earn more than the minimum wage, they are very likely to see changes in their pay as the minimum rate changes. All of which will present significant challenges to event companies everywhere. If you aren’t already it’s time to start preparing.