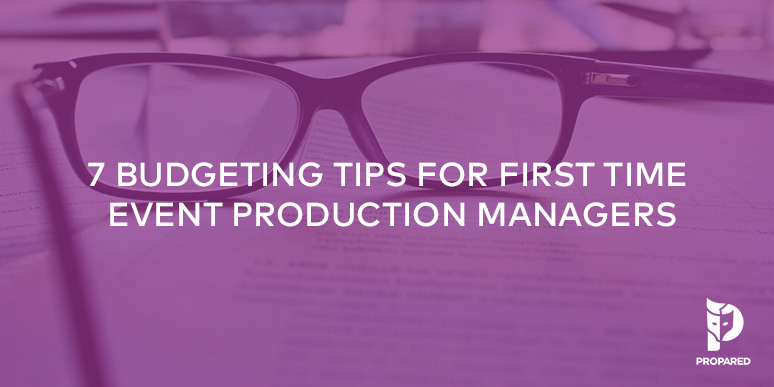 One of the hardest parts of planning an event is budgeting. How do you build estimates and set targets? How do you keep on those targets once things get going? And most importantly, how do you engage the client when things aren’t going as well?

The fact is, most event managers get very little training before having to build their first budgets. In fact, many universities don’t even broach the topic, especially coming from the technical theatre side of things. Suffice it to say, learning on the fly can be an expensive endeavor.

We sat down with our friend, colleague, and chicken-fried steak enthusiast Duncan Northern, Production Supervisor at Tinc Productions. We discussed some pointers for general managers and production managers putting together their first production budgets. While we mainly talked shop about producing in the arts, these same ideas can be applied no matter what type of events you’re producing.

What is the goal? This is a question often overlooked but can have a huge impact on where money is spent. What stage of development is the show in? What are the important aspects you’re currently trying to highlight? Are you looking to just see the script on it’s feet? Are you raising investor money for a Broadway or Off-Broadway run? Are you trying to make money or launch a brand?

Key takeaway: don’t spend money on parts of the show that won’t further your current goal. While you might think resources are unlimited, no company wants to see bloated budgets. And if you’re producing in the arts, resources are most DEFINITELY in limited supply. Only spend it on the things that will help you achieve your goal and measure the results after.

Here’s an example. If you allocate $125K for scenic design, hold some of that money back from the initial purchase. Why? Because there is always, ALWAYS going to be something the director and designer forgot about, want to include, change, etc. Put 80-85% of your max allocation in so that when you hear the familiar refrain, “Hey! We forgot about this one thing that we need to do to save the show,” you’ve got wiggle room. Even with all the last minute changes, you’ll be the hero if you still come in under budget.

A good rule of thumb, especially for producing commercial or Broadway theatre: assume that for every dollar spent on a production budget (lighting, scenic, sound, etc), plan on spending a dollar on labor to get you through previews. For Off-Broadway plan on 70 cents.

Labor will be always be one of the most expensive line items. It’s not unheard of to spend fully a quarter of the total budget on labor. Don’t be afraid by this number. No matter how awesome your set is, if you can’t get it in the door, it’s useless. Never underestimate the costs and benefits of people.

More times than not, it’s often that the first thing people will look to cut. It’s understandable, being that it is the biggest number on the budget sheet. But this is cutting your off your nose to spite your face. Skimping on labor can often lead to cost overruns (paying overtime) and potential safety hazards as your crew gets overtired.

4. The power of snacks

It’s incredible how much an occasional cup of coffee for the crew or a round of bagels will affect what can be accomplished in a day. And it’s a pretty easy, low cost gesture to make.

5. Allocate part of your budget for miscellaneous nuts and bolts

Sometimes it’s literally, the nuts and bolts. Or a roll of gaff tape or a run to the hardware store to pick up hanging plates. These small purchases might seem trivial but they add up over time. They are usually unaccounted for in overall planning and boom. You’ve gone over budget. Set aside $2K-$3K to allow for these small items. Another way to think about it: like waxing a surfboard. Sure, you can surf without it. But your ride could be a whole lot smoother with it. Even if you’ve dropped six figures on your scenic design, that one tiny thing will be the reason the whole show is held up. Don’t skimp over something this small.

Often times, lifts, scaffold and other large items that are shared across departments somehow don’t get accounted for in anyone’s budget. Make gear rental it’s own department.

You’re probably starting to sense a theme here. When department budgets are being assembled, department heads typically only think about their departments. It’s the responsibility of the PM to make sure that everything works well together and it all runs smoothly.

One final piece of advice when budgeting for the show for the first time. It’s one thing to budget for a show, it’s another to be able to confidently say where you are in relation to the budget at any time. Tracking expenses can be a whole beast in unto itself. Build a system to make sure you can actually stay on budget and accurately report where your spend is at any moment. That’s another blog. Happy budgeting!