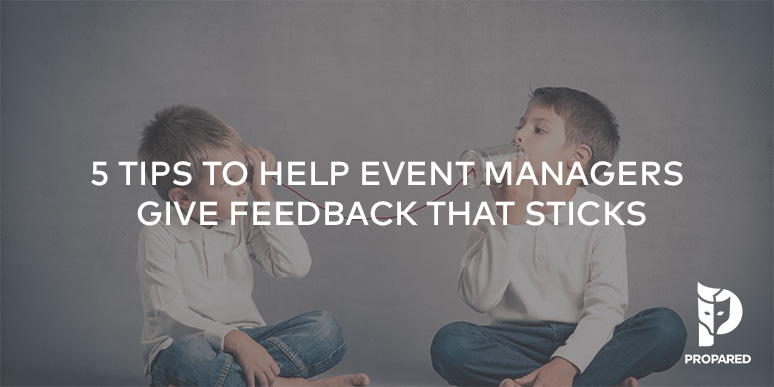 5 Tips to Help Event Managers Give Feedback That Sticks

One of the most awkward and uncomfortable things a manager has to do is give critical feedback to co-workers. In fact, it’s so uncomfortable that it often doesn’t even happen! Hey, you’re just doing what your parents always told you; “If you don’t have something nice to say, don’t say it.” Sound familiar?

But “saying something nice” is a bit of false equivalency. Just because you have something critical to say doesn’t mean it’s not nice. In fact, it may be a whole lot nicer to help someone grow and improve than to say nothing and let them flounder. You just have to find the right way to frame your feedback so that the recipient can absorb and implement it.

Here are 5 suggestions that will boost your confidence the next time you have to give someone feedback.

Most event managers will hold a post-mortem at the end of a project. A time after the craziness of the show when the team can all sit down and evaluate the work. It seems like an appropriate time to give feedback, right? Not necessarily. Feedback, especially if it is intended to inspire change, is most relevant when delivered close to the issue in question. In other words, giving feedback in a post-mortem could work, if it the debrief is imminent.

But more often than not, post-mortems happen a day or more after the event. As time passes, everyone forgets what exactly happened. You may remember things in ways that paint you in the best light. So, too, will your teammates. Suddenly, you all have different memories of how a situation went down. Holding a successful feedback conversation becomes more difficult and performance improvements are tougher to tackle.

Try to have a conversation immediately following the incident. Or at the very latest, sometime later in the same day. In fact, giving feedback should be a habit, something part of your daily activities. Remove the stigma of having a “feedback meeting” completely.

They key to feedback, both giving and receiving is specificity. Limit your conversations to very specific, actionable improvements. Focus on facts and tasks, rather than feelings and opinions.

It’s also best to limit a session to a single topic. The goal isn’t for you to unload everything you want to say. The goal is to help your team member get better. Don’t overwhelm. Give him or her the best chance of absorbing your suggestions.

As soon as you start in on the person, you run the risk of labeling. Is it the person who is unsafe (which is then perceived as some sort of character flaw) or the execution of tasks that is unsafe? Make it about the latter. Even better, use “I” when addressing an incident. “I found it frustrating when…” as opposed to, “You frustrated me when…”

This really goes hand in hand with making feedback a habit. Praise your staff when their work exceeds expectations. Recognize their contributions in pulling off events that can sometimes seem impossible. Show your team how much you appreciate them. It is just as important as recognizing areas for improvement.

Besides, if you only give feedback at designated times, the positive will begin to sound really insincere. Every time you commend the good work of your team, they’ll be expecting something negative to follow.

Remember the goal: to help your co-worker or employee grow. The best way to do this is to create an environment in which everyone is receptive and feels safe. Do you tend to lecture or scold? No matter how awesome your feedback is, it’s probably not getting through. Ensure that your charges are ready and willing to listen. And that they know that they have voices as well. Encourage questions, promote dialogue. You want the receiver to take ownership of your feedback.

Giving feedback is a vital part of running a business. It’s especially necessary for event managers due to the speed of the work. By taking immediate action, keeping it specific, and keeping the conversation alive, you’ll build a level of trust that will make your feedback much more impactful.

How do you give feedback? Share your experiences with us in the comments below.