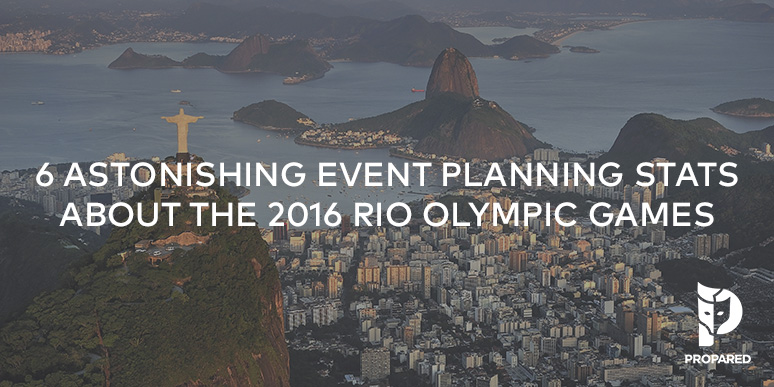 The 2016 Summer Olympics are upon us! Yes, it’s been a rough ride getting here, to say the least. And it remains to be seen if Rio can avoid falling victim to any of the problems that have plagued it in the run up to the Games.

But when the opening ceremony gets underway later tonight, there is a certain pageantry, a unity that, if only for a short while, helps us all forget our troubles. And we are reminded of the unbelievable amount of work that event organizers have to do to even attempt to pull off such a massive spectacle.

So in the spirit of glass half-full, we put together a list of stats that throw a little love to the event planners, volunteers, freelancers, and crew. Not only to highlight the challenges they’ve had to face but to shine a light on the amazing work they do. Enjoy! And hug an event planner next time you see one.

According to Reuters, that’s the expected cost of hosting the 2016 games in Rio. To give you a little context, CrowdCompass estimates that 10 million meetings and events are held each year at a total cost of $565 billion. That’s an average of $56,500 per event. $56,500, meet $12.3 billion.

To be fair, the majority of events don’t involve extending a subway line and revamping an entire shipping port. Still, that’s a lot of pressure on event organizers to deliver something that even remotely seems worth the investment. With great power (money?) comes great responsibility.

Kudos to Women’s Running and WalletHub for these stats on Rio2016 security. First, the Brazilian government provided a significant sum ($895 million) to Rio for security spending. The state promptly turned around and spent it on a security force (85,000) comprised of Brazilian security professionals and members of the armed services. That’s double the personnel on hand during the 2012 Summer Games in London.

Then, with the change left over organizers bought up and installed quite a bit of security fencing around major facilities and housing (200 km). Given recent attacks in Paris, Nice, Orlando, and elsewhere, we’re not surprised at officials exercising extreme caution.

The number of meals the Rio 2016 Organizing Committee expects to serve to athletes, staff, and volunteers during the nearly three-week event. We’d love to see that catering team at work.

This number varies, depending on current staffing needs. But according to organizers, this is the number of staff, freelance overhires, and volunteers that will be working together to execute a successful Games. We suspect there’s not going to be too many “all-hands” meetings.

The city will boast this many new hotels once the dust clears and the Games have packed up and left town. Which begs the question; what kind of expansion will there be to the events, meetings, and incentive travel industry in Rio? One thing is certain. Corporate event planners are going to have a whole lot more options come August 21.

Of course, not all news is good news. This is the number of workers that have died over the past three years during production and builds. Event workers gives their lives, sometimes literally to their work. We mourn their passing and hope the Games can be a positive testament to their dedication and hard work.

And a bonus one that isn’t just about event planners but was too important to ignore.

The number of inspiring, strong, and fearless athletes who will compete for the first ever refugee team at an Olympic Games. As noted in the Washington Post, refugees have performed in past events but never as a recognized team. Hailing from Syria, Ethiopia, The Democratic Republic of Congo, and South Sudan, they will represent some 60 million refugees worldwide. They are competitors, and should be lauded for their abilities as athletes. But they are also ambassadors, raising awareness about an international crisis in front of a massive audience. We are humbled by their stories.