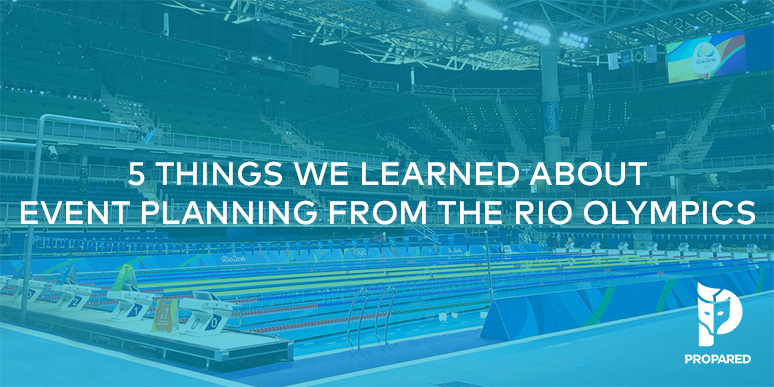 5 Things We Learned About Event Planning From The Rio Olympics

Well, that was fast. Like all events, even the largest and most complex, the 2016 Olympic Games took months of hard work and in the blink of an eye, they were over.

As the event organizers assess and debrief, it seems like a good time for other event planners to do the same. Yes, mostly from the sideline. But because the Olympics are such a public spectacle, we gain a lot of insight into the good, bad, and downright green (apologies, Olympic divers) that came out of planning the games. Here are 5 things we learned that can help event planners find success in their own events.

1. Keep Your Attendees Together

Your design, concept, schedule of activities; everything you control might be perfect. And it still might not matter. If you don’t create an environment that makes it easy for attendees to gather, network, and share the experience, you’ll find yourself asking, “What happened?”

One of the major problems Rio event organizers are reviewing this week is the number of empty seats during the several major events. Even at the track and field stadium, the centerpiece of the Olympics. NBC News reported that the main venues were significantly spread out across the city. This made travel between them difficult and reduced the opportunity for attendees to gather and produce a “Carnival atmosphere.”

Event planners and marketers talk a lot about “engagement” these days. Bu the best engagement is still providing a space where attendees can engage with each other.

2. Be Prepared to Give Up Control of the Conversation

Now that planners have fully embraced social media as integral to their events, they must also accept that they no longer have control of how their messages are interpreted.

Nowhere was this more evident than in Rio. NBC could do little to control the social media response to perceived sexism in Olympic coverage. Likely not the message the company was trying to communicate. Or take several members of the Chinese team, who used social media to connect on a more personal levelwith viewers. In the West, this might seem innocuous. But it’s a relatively new and bold step forward for Chinese athletes.

The company paid $12 billion for exclusive broadcast rights for the games through 2032. Yet ratings for the Rio games were down 17 percentcompared to London 2012, the first ratings decrease since 2000. Additionally, viewers complained of excessive commercials and tape delays of opening and closing ceremonies.

To be fair, on demand viewing has exploded since the London games and there was a significant increase in viewers who streamed the games online and on mobile devices. And as noted in the WSJ article above, ads during the opening ceremonies were actually down. But perceptions sometimes equal reality.

Which is all the more reason for event planners to remember to stay engaged with their core audiences. Never assume you’ve found the one right way to connect with an attendee.

What good is an event if your attendees can’t remember what it was about in the first place?

Event organizers reportedly spent 12 times less than London 2012 and 20 times less than Beijing 2008 on Rio’s opening ceremony. And by all accounts, it was money well saved. Organizers crafted a compelling story about sustainability, social responsibility, and of course Brazil’s own history and culture. Event planners can look to Rio as a reminder that a well-told, compelling story cannot be replaced by even the most whiz-bang of technological wizardry.

Event planners are always up against a deadline. But it is always easier to address issues before they become full-blown crises than try to manage them after the fact.

You’ve probably read story after story about such breakdowns in planning the Rio games; from raw sewage in the water, to safety for travelers, to the construction of the Olympic village itself. While we can’t say for sure such issues could have been mitigated, even avoided by better pre-planning, it is clear that dealing with problems in late stages of production is never preferable. With little time to course correct, planners are left to do whatever is necessary to fix issues, often leading to budget overruns and shoddy work.

With your own events, think about how much time you devote to pre-planning. Ask yourself the following questions.

Experiment with spending more time pre-planning than you think you need. See how it affects the rest of your event and debrief afterward. Maybe you’ll uncover a new way to anticipate problems before they happen.

We can’t wait to see what event organizers have in store for the Winter Games in Pyeongchang 2018!