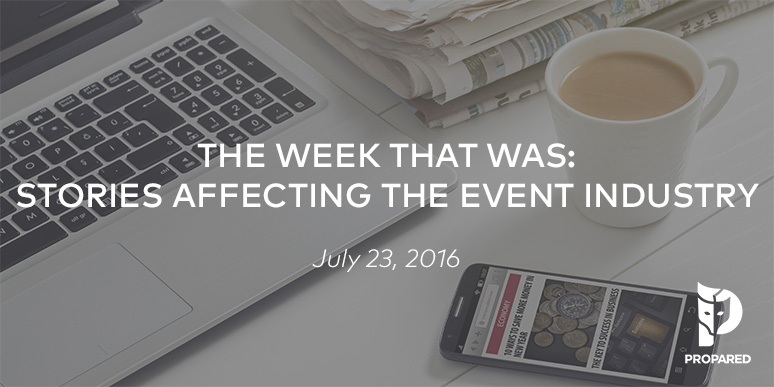 The Week That Was: Stories Affecting the Event Industry – July 23, 2016

It seems that the first half of this year has been as wild as any we can remember. We thought it might be helpful to start a new series on our blog that briefly summarizes a few big stories that could affect you, our event planner and manager friends. You know, just a little light weekend reading!

It’s a big world and we might miss some things. If there’s a story you think we should mention, please drop us a line and let us know.  Without further ado…

We all remember the horrible events of last Friday when a truck driver drove through the middle of a Bastille Day celebration in the French resort town, killing more than 80 people and injuring dozens more. This tragic event, coupled with recent attacks in Paris, Orlando, and others have raised security concerns for large public events and gatherings.

Government officials in Australia, the UK, and the Netherlands have all called for reviews of policing and security protocols in an effort to increase safety for attendees. Here in the US, event organizers beefed up security at this past week’s Republican National Convention. Even at the local level, law enforcement officials are assessing how to move forward in the wake of several tragic police shootings.

All this adds up to increased pressure on event planners to establish comprehensive safety plans and cooperative engagement with security and police before productions (especially large gatherings) can move forward.

2. Republic National Convention Comes to a Close; Democrats up Next

Though he’s been the presumptive Republican nominee for president for several months, Donald Trump made it official on Thursday. In a nearly 90-minute speech, he accepted his party’s nomination and, with the aid of a few thousand balloons, brought the Republic National Convention to a close (insider tip: skip to the 2:00 mark of the video).

Whatever your politics, you have to admit it was quite a dramatic week in Cleveland. As confessed theatre nerds, we on the Propared team definitely enjoyed the ups and downs and the off-script moments. After all, who doesn’t like a good show, filled with tension and rising suspense? Next up, the Democrats. Their convention kicks off Monday in Philadelphia, PA.

Watching the drama unfold this week, we got to thinking; what must it take to execute such a massive event? Lucky for us, we found this great piece from PBS. We’d love to be a fly on the wall during that post-event debrief. Pass the antacids, please. Also check out this post from Tweetwall is you’ve ever considered getting into producing political events.

Ok, quick back story. The Public Facilities Privacy & Security Act (or HB2) is a controversial bill passed in the state earlier this year that removed some existing protections against discrimination for LGBTQ individuals. It also requires that individuals use restrooms that correspond with the gender on the birth certificate, rather than the gender they identify with. Hence, the “Transgender Bathroom Law.” And that doesn’t even mention other restrictions that further limit municipal actions in counties across the state.

Immediately after it was signed into law, North Carolina’s governor and state legislature received a wave of backlash from civil liberties and anti-discrimination groups. Even the US Justice Department has filed suit against the governor and Dept. of Safety on grounds HB2 violates the Civil Rights, Title IX, and Violence Against Women Acts.

The business community has responded as well. Several Fortune 500 companies announced plans to halt expansion plans in the state, prominent music acts have cancelled tour appearances, and event organizers are moving their conferences and meetings elsewhere.

In the most high-profile rebuke to HB2 yet, the National Basketball Association has announced plans to move its annual All-Star game from the state. Reports are already suggesting the law has had a significant negative impact on North Carolina’s economy. With the NBA now headed out of town as well, it will likely get worse.

The fight over HB2 raises an interesting question for event planners. How and when do your moral and/or political beliefs influence your business decisions? Whether it is environmental efforts, social justice, discrimination, religious freedom, etc. What questions do you always ask before signing a contract?

4. Comic-Con Gets Underway in San Diego

One of the biggest and most exciting spectacles of the year opened its doors on Thursday night (is it coincidence that political drama gave way to Hollywood drama on the same day?). As much a showcase for comics as it is for the biggest upcoming films and television shows, event organizers anticipate upwards of 150,000 people to attend. Each day is packed full of panel sessions, screenings, first-look trailers, and exhibitor and fan tables. There is truly something for everyone during this whirlwind weekend.

Last year, the good folks at BizBash did an interview with New York Comic-Con event planner Lance Fensterman. It’s a great peek into what it takes to execute such a massive and diverse event.

As for our favorite thing we’ve learned so far from San Diego Comic-Con this year? Lin-Manuel Miranda + “Hamilton” + “Drunk History.” Told you we were theatre nerds.

This year, Event Manager Blog has teamed up with IBTM World to co-produce and judge the IBTM World 2016 Technology and Innovation Watch award. Applications are open for new event technology companies to showcase their products and how they can help push the event industry forward. Selected finalists will receive a free exhibition booth at IBTM World in Barcelona, Spain at its annual event (November 29-December 1). Interested companies can apply here. Good luck and maybe we’ll see you there!

Finally, if you’ve never listened to Slate’s “Working” podcast, you’re missing out. It’s an excellent tour through the personal stories of how Americans do their various jobs. As a bonus, scan through the backlog to find some good past episodes about live event planning with Slate Live’s director, Faith Smith. But this week, there is an absolutely fascinating one about what it’s like to be the President of the United States’ master of scheduling. Gregory Lorjuste talks big picture planning down to the fine details. You can listen on the web here or subscribe to “Working” in the app store of your choice.

Have a great weekend!