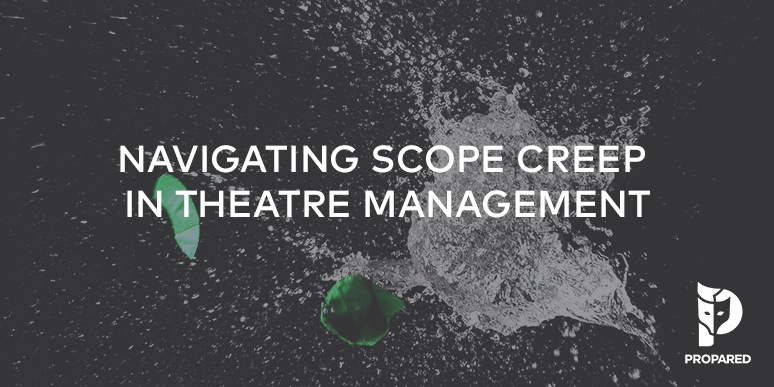 You sign on for one thing, and by the end, it’s turned into a whole different beast. Whether you’re starting a new role or managing a production, you might be on the verge of what we refer to as Scope Creep.

It starts with a seemingly simple request, a tiny addition, or an exciting new idea. Suddenly, you’re adding expenses, hiring more crew, expanding your team, and spending more hours in the theatre than you anticipated.

As soon as you increase scope, you increase the amount of information and the number of communication channels you need to manage – creating more room for error.  And with all that unplanned stuff piling up, a breakdown is bound to happen.

There are a few standard things you can do to mitigate against Scope Creep.

For a new job, draw up a very detailed description of your duties, and (just as important) duties that are NOT your responsibility. For productions, draft detailed design statements and budgets, document your available resources (such as money, time, and space), and make sure everyone knows about them. If you don’t, you’ll be saying yes to a lot of things you didn’t initially intend to support without the resources avilable to come through. Specificity leads to clarity.

But let’s assume that at some point, you find yourself in the situation where the scope of your job has increased beyond its initial framework or the show is spiraling out of control. You look around and think, how did this happen!?  What do I do now?

Don’t be afraid to ask for help.

Once new tasks are added, re-draw your org chart. What are the major responsibilities and who is in charge of executing them? If it seems that you or one of your team has too much to do, you might just need another pair of hands.

Unfortunately, you often don’t have the budget to add more people. (That could be a good thing to add contingency funds in for next time!). In these cases, you have to do more with the resources you have. Can you build an element with different materials? Repurpose a light? Paint a flat instead of build it from scratch? Here compromise becomes key.

Don’t be afraid to point out reality.

Saying NO flat-out to something is rarely advisable. It puts up a wall between you and your team creating frustration and conflict. Instead, give them an understanding of the ramifications of the increased scope as soon as you see it creeping. Come to the table with the facts, give everyone options, and decide together as a team.  Maybe this means finding a compromise, securing more funding, or rethinking the vision.

If the heart of the issue is your overall job role, don’t be afraid to sit down with your boss to figure out a solution.

Scope Creep can be dangerous, particularly for young or inexperienced theatre managers. We will often take it upon ourselves to try to do more than is advisable. This is an awful way to resolve the issue. You’ll find yourself working with little to no sleep which leads to irrational decision-making and a dangerous work environment. It also sets dangerous precidents for future projects.

Even veteran managers can get overwhelmed with Scope Creep. Their experience might help them push through but not without a good bit of stress and some sleepless nights.